Your thyroid is one of the most important glands in your body, but it doesn’t get the attention it deserves. Thyroid disease is one of the most common diseases with around 20 million Americans having some issue with their thyroid. They don’t know that many of their symptoms are not isolated, and it’s because their gland is not working how it’s suppose to.

What Is The Thyroid Gland

The thyroid gland is a butterfly-shaped gland located in the bottom of the neck below the Adam’s apple and in front of the windpipe. It is just one of many glands in the body that is part of the endocrine system. The thyroid’s main purpose is to control your metabolism by releasing hormones that helps to breakdown macronutrients so your blood cells can use it as energy. When it’s not functioning properly symptoms of fatigue and depression start presenting themselves. Sometimes it can be difficult to pinpoint the thyroid as the main culprit for these symptoms.

What Are Some Common Thyroid Disorders?

Even though the thyroid is a small gland it can present some big problems for people when it is not working properly.

Hypothyroidism: An underactive gland which produces inadequate amounts of T3/T4 thyroid hormones is defined as Hypothyroidism.

Hashimoto's disease: An autoimmune disorder in which the thyroid gland is attacked by immune system in response to antibodies. Increased inflammation and destruction of the thyroid gland initially leads to hyperthyroidism and later followed by hypothyroidism. Hashimoto’s disease is the most common cause of hypothyroidism in the United States. It primarily affects the middle-aged women but also can occur in men and women of all ages.

Goiters caused by hyperthyroidism are a noncancerous growth in the thyroid gland. They grow because of a lack of iodine which the thyroid needs. Goiters can make breathing and swallowing difficult. They are common in women over 40 and would need to be surgically removed or by taking iodine to shrink. The nodules are like tiny goiters where a tiny percent are cancerous. Finally, there is thyroid cancer. That might sound scary to most, but it rarely spreads to the lymph nodes and has a 97% cure rate if caught in time.

Thyroid disorders are very treatable and with a sizeable chunk of the U.S. population suffering from it. Having an underactive or overactive thyroid doesn’t mean you can’t live a healthy normal life.

What Are Some Symptoms of Various Thyroid Disorders

While this list isn’t complete it goes to show that a lot can go wrong when this gland becomes dysfunctional.

Why Is Thyroid Disease So Common

No one can pinpoint to one definite answer. The thyroid gland can be very finicky, but there is some speculation as to why thyroid diseases develop in an otherwise healthy person.

Test panels for TSH (thyroid stimulating hormones) usually determines what kind of disorder a patient is suffering from. But, there are no clear guidelines telling doctors which levels of TSH are normal or abnormal. This can lead to misdiagnoses. Another cause of thyroid disease is environmental. Toxins, pollution, chemicals, pesticides, plastics that we are regularly exposed to may cause the thyroid to operate irregularly. Radiation is another big reason that affects the thyroid. Food borne illnesses, and viruses can affect the thyroid as well.

How Are Thyroid Diseases Treated

If you’re diagnosed with either hypo or hyperthyroidism your doctor is likely to prescribe something called Synthroid and if you can take a guess it’s synthetic hormone. Of the 5 different hormones released by the thyroid the two big ones T4 and T3. Synthroid is a synthetic version of T4 and only T4. The other four are largely forgotten because 80% of the hormones released by the thyroid is T4. But, those other 4 hormones are just as important in regulating metabolism. That’s why there are more natural ways to use combination of T3 and T4 to help functioning properly. 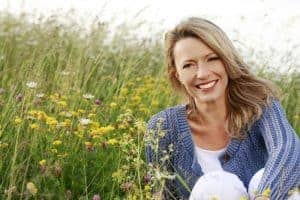 What Are Some Natural Ways To Treat Thyroid Conditions

One of the main reasons your thyroid may not function properly is a lack of iodine. Iodine is incredibly important. And many natural herbs like bladderwrack are high in iodine and can be used to shrink goiters. Ashwaghanda is another herb that is known to regulate the functions of the endocrine system that stimulates metabolism when it has slowed down because of hypothyroidism. Selenium is essential in the conversion of T4 to T3 (active). Nutritional support is crucial in maintaining a healthy thyroid function.

Lower carb diet replaces sugars and grains with healthy fats. Many women eat way too much grains and that can negatively affect their estrogen levels and thyroid. A detox of heavy metals is another natural remedy for those disorders. And then there is bio-identical hormone treatment.

What is Bio-Identical Hormone Treatment

Many women living with this condition have a deficiency in the hormone progesterone. Sometimes an overactive or underactive thyroid results from too much estrogen. And they suffer from symptoms of having these conditions. The hormones in a woman’s body must interact with one another so being deficient in one can affect the others as well.

Millions of Americans suffering from these disorders are prescribed medication that can improve their lives on a daily basis. However, the medication can only treat symptoms and does not a cure the problem. Your thyroid is a delicate and important gland and should be treated as such. Treating it by getting to the root cause will make sure it will be humming along regulating the hormones your body needs to function properly.

Contact Ascends Natur'l Medicine for a initial consultation to help you understand your symptoms or disorders.